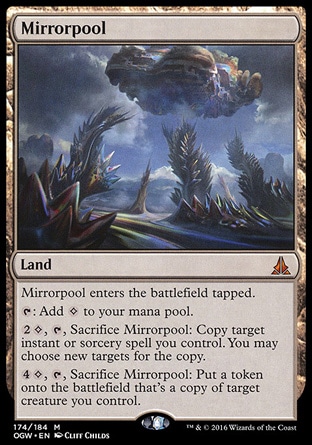 Magic the Gathering and Wizards of the Coast like to give us hidden gems for EDH all the time that are just waiting to be discovered. Then again, there are cards that are just asking to over perform. Mirrorpool is one of those cards.

With the ability to be a utility land in any deck, this card can be an secret weapon, yet I very rarely see it across the table. Mirrorpool has a couple of obvious uses, giving good value off of good spells. But when used to double a spell like that makes tokens when a card like Purphoros is out, it can end the game in a hurry, especially for only 3 mana.

The second ability is no joke either. Think about copying utility creatures like Consecrated Sphinx to gain card advantage or having an Oloro on the battlefield and in the Command zone. This card can break games wide open.

This is one of those cards that is often over looked, but can very easily turn into a game ender. It also is rarely a dead card since at the worst, its a land that that taps for colorless and at best you can twin cast your game winning spell when the first is getting countered.

There is an argument to be made that it might be too slow, however since most people do not have a way to remove a land, it can be an easy way to sneak in a win even if it has to make it around the table.

What are your thoughts on Mirrorpool?

Image is used for reference only and is the product of Hasbro and Wizards of the Coast.

Just a nerd from Milwaukee who likes to share his deck ideas and stories. I am always up for feedback or to chat about the posts. You can find me on Twitter, Instagram, TappedOut, MTGO and MTG Arena as @OsoGladiator Good Luck, Have Fun! View all posts by OsoGladiator