So it is almost rotation time and I have been away from deck building for a while with the summer. Thus, I decided to try something different than another standard deck, especially because I am still enjoying a updated version of my The Vampire Conquistadors deck (Updated List Here). I have been working on a few standard decks, so if they still appear viable after rotation, maybe I can write about them.

Anyway, back to the reason you are here. I wanted to brew something I had not worked on before, and for me that meant another adventure into a new format. I had never played legacy before, but had always wanted to give it a try. At first I wanted to find a budget way to introduce myself to the format. Having always held a want for an infect deck I decided to have a go at it. I looked at some of the other decks in the format and their extremely high price tags, and that made me decide to stick with a mono colored deck. Out of the five choices, I decided to go with green, due to its great pump options, especially a few free options. This did mean for going the counter magic of blue, but, it was also good for the pocket book.

To start, I slapped together a super budget list. This Infect Deck sits at just about $50 on TCG Player. There are a few other options out there for alternate versions of a similar deck by other brewers as well if you are looking for ways to tweak this and stay within a modest budget.

Going from there I began to look at ways to make the deck more competitive. I knew I would be facing down a suite of counters and removal that would likely see my first few creatures sent to the bin. So to up my creature count, I of course added the allstar, Inkmoth Nexus. This would be added to the Glistener Elf, Ichorclaw Myr and Necropede.

Because Infect is looking to alpha strike and not have to wait to long to get the kill, we need the ability to pump up one of our creatures quickly. The ideal way to do this is for free. So the main two options we use are Mutagenic Growth and Invigorate. Both can be paid for via alternate costs, allowing for us to hit for lethal even when an opponent may have thought they were safe. In addition to these two options I added a few copies of the green force of will. Bounty of the Harvest. This can also be cast for an alternate cost, but is a little less ideal than the others since that cost exiles a card from our hand. 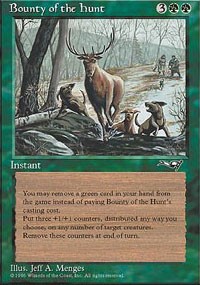 Free pumps on our creatures are ideal, but there is another way to do this without cards in hand. We use two lands to be able to give our infect creatures a little more bang. Pendalhaven and Cathedral of War were included in the mana base as a way to increase the potency of our otherwise small threats. One thing to note with Pendelhaven, you will need to use its pump ability first, since it can only pump 1/1 creatures.

This deck is truly a deck that needs to go all in, when something connects we need it to be a big hit if not a one hit knock out, this means bringing in the true all or nothing pump spell, Berserk. 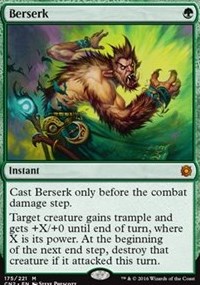 We will also need a way to protect our guys once they are on the ground, to do this we are going to use Vines of Vastwood. This is a nice spell for us because it not only protects, but if kicked can also pump an attacker. In addition to Vines, we are also running one none green card in Apostle’s Blessing. This card allows us not only to protect, but potentially by pass blockers as well.

Finally, we need a second way to ensure our damage makes it through blockers if we cannot get past them all. This means a second way to give our guys trample. Rancor is the best and really only option that could round out this list. Not only does it give a solid power boost, but it also gives trample and is reusable. 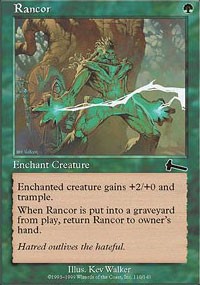 So what do you guys think? Also this deck, even with upgrades, is still a similar or even lower price to some of the modern and even standard decks out there.

Just a nerd from Milwaukee who likes to share his deck ideas and stories. I am always up for feedback or to chat about the posts. You can find me on Twitter, Instagram, TappedOut, MTGO and MTG Arena as @OsoGladiator Good Luck, Have Fun! View all posts by OsoGladiator